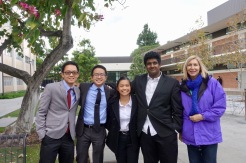 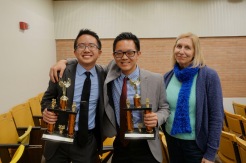 On March 3rd, Valencia High School’s Speech and Debate Club participated in the Orange County Speech State Qualifiers. Jacqueline Duong (9) participated in impromptu speech, where she advanced to semifinals placing twelfth. Jay Kim (11), advanced to the final round, and placed second overall. In the same event, Ethan Thio (12) finished in first place while earning the title of 2018 Orange County League Champion for his third consecutive year.

As explained by principal, Mrs.Olivia Yaung, Thio’s undefeated career “makes him one of the longest tenured champions is league history.” Thio is now a double champion having received two league titles, both of which are from speech and debate events. In impromptu speech, students receive three potential topics to choose from, with two minutes to prepare and five minutes to speak. Thio described the experience as an “adrenaline rush.” In order to prepare for State Qualifiers, Thio often composes and orates preparatory speeches. As for Kim, the constant practice taken took “quite the effort and commitment.” Kim stated, “For state I will have to prepare in different style and accelerate my practice.” Accompanying Thio to the State competition will be his partner Duong and fellow qualifier Kim.

Working together as a team, Duong and Thio participated in the parliamentary debate. During this event, they get one topic and side. They are to spend twenty minutes before each round preparing for their speech and how they will advocate for their assigned side of the argument. All competing students go into a prep room where they do not have any contact with outside sources. According to Duong, these topics can range from immigration to arming teachers. To prepare for the event, Duong expressed, “I was more open to listening to people because everyone always has new ideas that I can listen to and incorporate in my speech.”

Thio and Kim will represent Valencia at the Orange County State Championships on April 20-22.